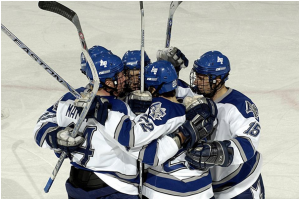 It’s the new year, and we are well into the NHL season with a select few teams taking control over the points tally. The games so far have been full of nail-biting, adrenalin rushing, intense action. There have been a few scandals along the way, such as Nate Schmidt of the Vegas Golden Knights getting banned for 20 games for substance abuse, but all in all, it has been an exciting competition so far.

With the games getting serious with each passing day, punters should be in the thick of the action right about now to capitalise on the winners and make some serious profits. Bookmakers, such as Bet365, are eager to welcome newcomers as well as regulars, and Canadian bettors can make the most of their joining and matched bonus offers.

The best part about this is that punters have with them, in the palm of their hands, an all-around companion that helps them bet not just on NHL but all major sports around the world.

It’s quite clear by now that top teams are making their play for the championship. However, upsets do happen, and fans, as well as punters, need to keep a keen eye on every game moving forward.

The bolt has struck the points tally in a big way, and it seems they have scared everyone off down below. With a six-game winning streak that included defeating The Carolina Hurricanes 3-1, Tampa Bay Lightning is pretty much going to end up with the cup in the end, unless for something unpredictable happening. Punters should be betting on their remaining games, and with +300 odds to end up as overall winners, backing Tampa Bay is a pretty safe bet right now.

There is no doubt that this time of the year is an exciting moment, especially in the North American sector. On the one end NBA championships are going on, and on the other, experts are already picking out their NFL divisional favourites. The options available for punters to make some serious cash through sports betting are genuinely unlimited and super satisfying. In NHL, the Winnipeg Jets are listed at +1000 and have won 29 of their 45 games. Their next few matches are going to be crucial. If they can win a few and climb up the ladder to the second spot, then the players will undoubtedly get the boost to keep them going.

A seasoned bettor will know that while it is essential to keep track of the frontrunners, one must always be aware of the underdogs. The rise of the Flames to the second spot has taken everyone by surprise, but many an astute punter made quite a bit of profit on the way. With team members like Mike Smith, David Rittich, Sean Monahan, and Mathew Tkachuk playing their best game to date, the Calgary Flames might even topple Tampa Bay in the end. At +1100 odds, they sure do make for an interesting bet that can lead to a significant payoff.